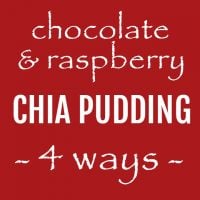 Learn how to make Chocolate AND Raspberry Chia Pudding! These easy-to-follow instructions will teach you how to make TWO different chia pudding flavors, chocolate & raspberry, and how to elevate each flavor into an irresistible chia seed dessert with a creamy texture. 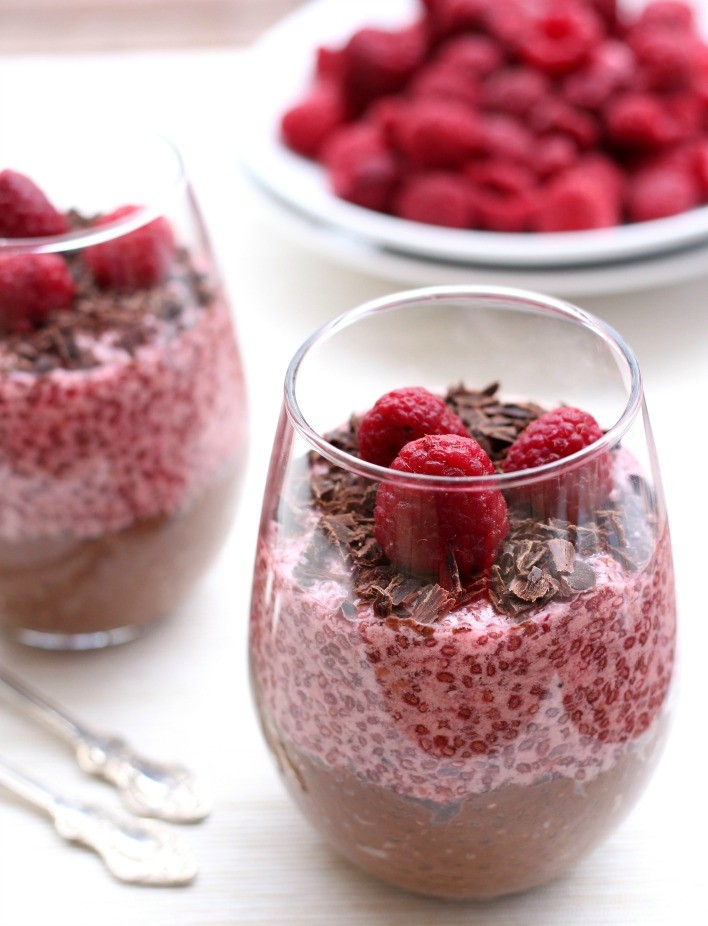 At a glance, these gorgeous bowls of chia pudding may look like an indulgent dessert loaded with sugar, but they are actually quite healthy.

The sweetness comes from dark chocolate, raspberries, and maple syrup, so there is no added refined sugar!

Chia seeds have become very popular in recent years because they are very nutritious and super versatile.

They are loaded with Omega-3 fatty acids, protein, and antioxidants. In addition, they are packed with soluble fiber, which helps regulate digestion and keep you feeling full and satisfied.

Chia seeds can be used as an egg substitute, added to smoothies and energy drinks, and used to thicken soups and sauces. But the most popular way to prepare chia seeds is to make chia pudding.

You’ll love these delicious chia desserts when you’re craving something sweet but want to stick to your health and wellness goals.

The Story of This Recipe

So, a few years ago, I decided to try and make a chia seed dessert with chocolate and raspberries. It worked really well, and I published the original recipe for the Chocolate and Raspberry Chia Pudding (#4) in December 2013 here on the blog.

As time passed, I came up with three more ways to make this dessert using the same ingredients.

I also improved the original recipe by adjusting the ratio of the chocolate pudding and adding a small amount of maple syrup (the original recipe didn’t include any sweetener, and many people commented that the dessert wasn’t sweet enough).

Why You’ll Love This Recipe 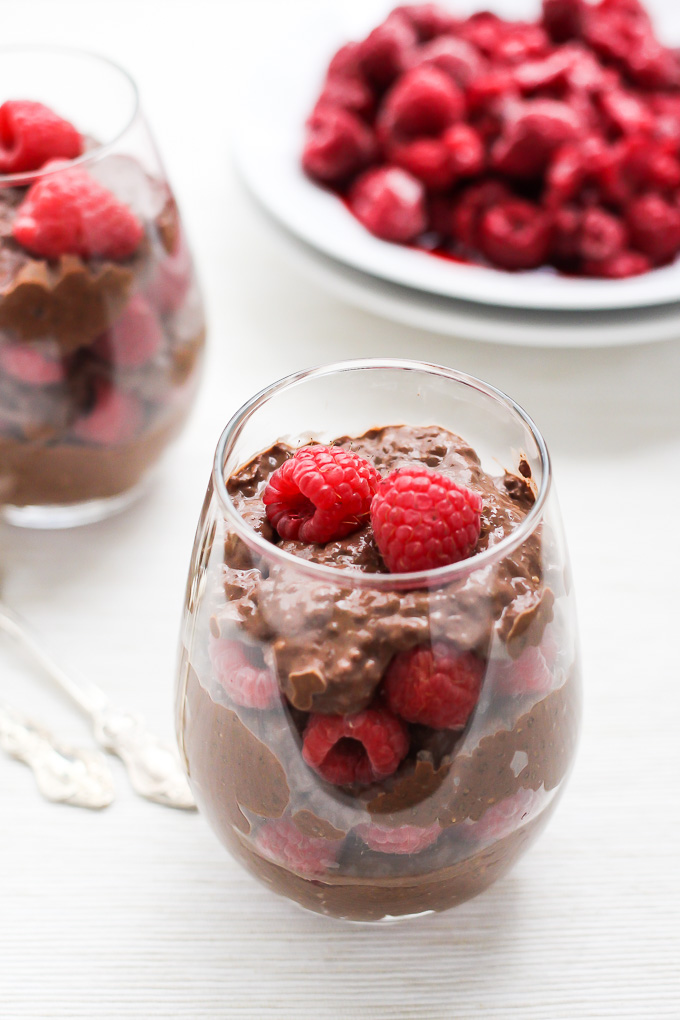 How To Make Chocolate and Raspberry Chia Pudding

Once you’ve gathered the ingredients, assembly is a cinch! For the full recipes, see the recipe card below.

These four chia desserts are made by combining the same ingredients in a slightly different way.

This chia dessert is made by simply combining the chocolate chia seed pudding with raspberries.

Although you can use fresh or frozen raspberries to make this dessert, fresh raspberries are preferred because they hold their shape better and don’t contain extra moisture.

This chia dessert is made by combining raspberry chia pudding with chocolate chunks. You can use fresh or frozen raspberries for this chia pudding.

Make sure to use a good quality 70% dark chocolate and make chocolate chunks yourself by simply chopping the chocolate with a knife. You can also use cacao nibs.

Decorate this chia dessert with a few raspberries to add some color. 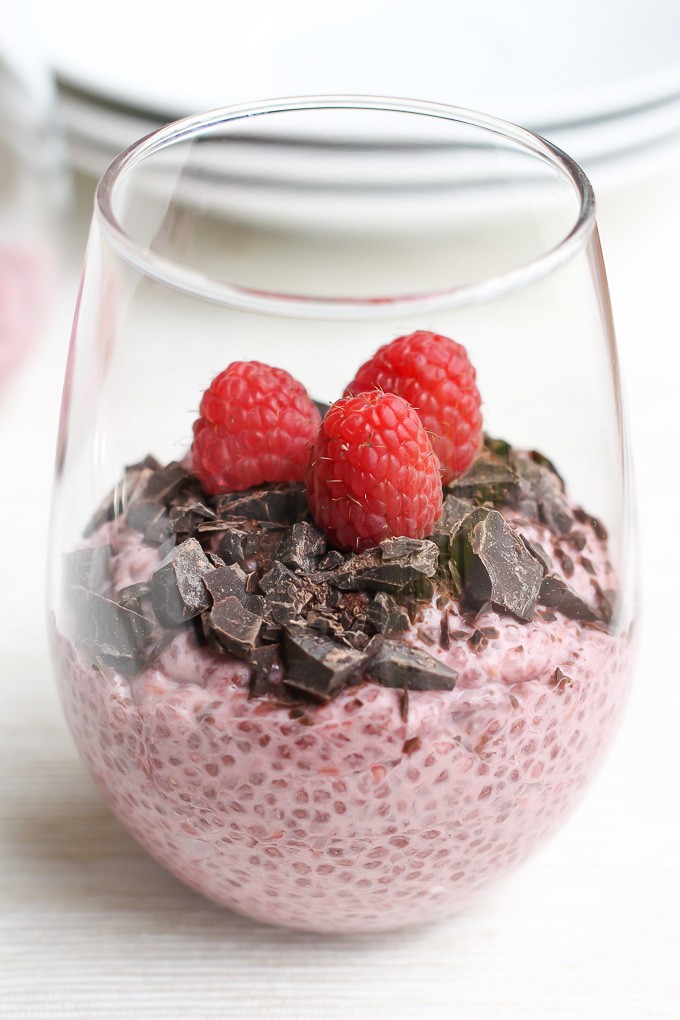 This chia dessert is made by combining chocolate chia pudding with raspberry sauce.

You can make the sauce smoother if you push it through a mesh strainer to remove the tiny raspberry seeds. 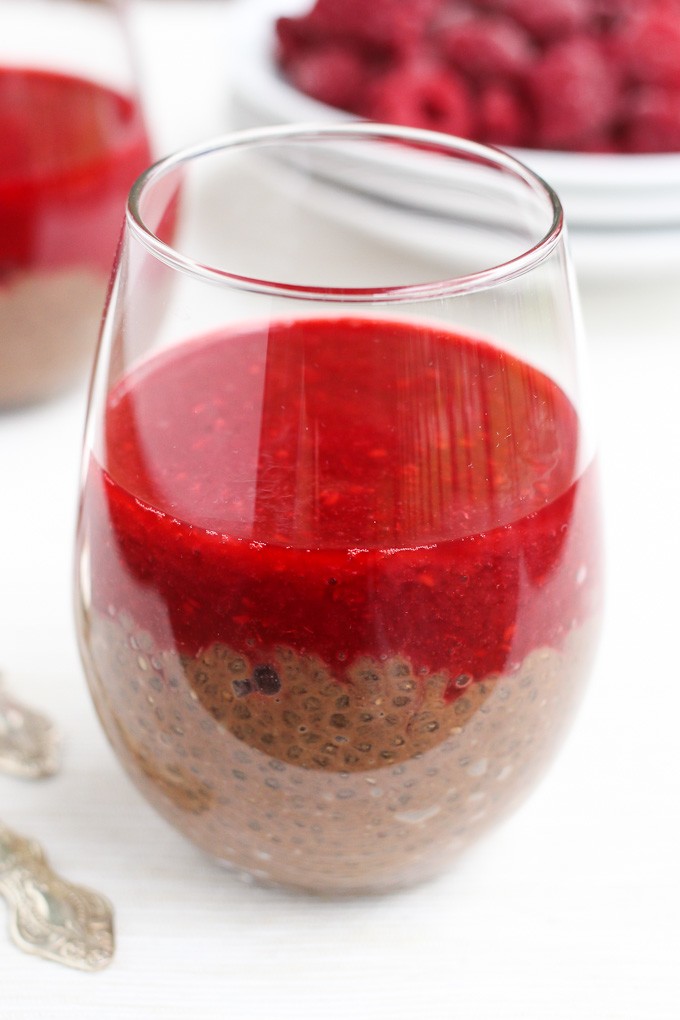 This is the original recipe that was first published in December 2013.

The chocolate chia pudding is heavier than raspberry chia pudding, so it’s better to put it on the bottom layer.

Make it even sweeter – To me, flavoring chia seed pudding with chocolate or raspberry sauce is enough sweetness, but if you’d like to make yours sweeter, try using sweetened non-dairy milk or add a bit more maple syrup. You can also use agave or date syrup.

No added sugars – This is a great tip submitted by a reader. Instead of adding maple syrup, blend a ripe banana in with the milk and chocolate (or raspberry) sauce, and then use that mixture to soak your chia seeds.

Once the pudding thickens, portion it out into meal prep containers, and keep refrigerated for 2 to 3 days.

Remember, the flavors will diminish the longer it’s refrigerated. I found the integrity of the chocolate flavor holds up better than the raspberry.

The assembled desserts can be stored in the fridge for up to 24 hours.

Do you soak chia seeds before making chia pudding?

No. If you soak your chia seeds beforehand, the chia won’t have the capacity to absorb the milk, so it won’t thicken into a creamy pudding. For chia pudding, the seeds are always soaked directly in milk.

How long do chia seeds need to soak in milk?

The longer chia seeds are left to soak and absorb the milk, the more hydrated and moist they become.

So, at the bare minimum, let the chia seed milk mixture stand in the fridge for at least 4 hours.

But for an even softer and creamier texture, let the pudding stand in the refrigerator overnight.

Why is my chia seed pudding runny?

If your chia pudding has a watery, sticky consistency, you may have overmixed the ingredients, or the chia seed-to-liquid ratio was off.

Next time, blend the milk, chocolate or raspberry sauce, and maple syrup before adding the seeds; when you add the seeds, mix until combined.

How do you make vegan chocolate chia pudding?

To make chocolate chia pudding without dairy, use your favorite vegan milk alternative and ensure your chocolate bar is dairy-free.

A reader mentioned making this with coconut milk and using cocoa power plus a splash of vanilla instead of dark chocolate with great results!

1. For Chocolate Chia Pudding with Raspberries (makes about 3 to 4 small or 2 large chia desserts):

4. For Chocolate and Raspberry Chia Pudding (makes about 3 to 4 small or 2 large chia desserts):

Nutrition information is a rough estimate for 1 of 2 servings calculated for the original Chocolate and Raspberry Chia Pudding recipe (#4) made with unsweetened almond milk.

Did you make this recipe?

If you tried this recipe, please give it a 5-star rating! To do this, click on the stars above. You can also leave a review or comment below. And don't forget to tag me @mariaushakova.blog if you share a picture on Instagram!

This was delicious!!! Very creative recipe. Thank you for sharing.

Wow 4 recipes in 1! This has been pinned! Any combo of raspberries and chocolate is fab...especially if it's for breakfast & good for you too. For the person concerned about the sweetener, you can also sweeten in a 'no sugars added' way by blending a banana with the milk & then using that to hydrate the chia seeds. Banana also gets along ok with chocolate & raspberries can easily over power the banana's flavor leaving mostly the sweeter taste.

Delicious recipe, thankyou! Perfect amount of sweetness and amazing texture. How long would this last in the fridge?

Hi, Abbey! I am so glad you like the recipe. Like Mangalore Cafe said it keeps well for about two days. The chocolate chia pudding would last longer than the raspberry. But if they have been mixed, especially if you've added the berries, I wouldn't keep it more than two days.

It good for 2 days. After that it starts to get a little bland not noticable. I kept it for 5 days for my friends who could never make it. They kept saying they would come please keep it (after seeing the pics I posted) they loved it after 5 days. But I could notice a slight decrease in flavour.

Agave also works amazingly well with this recipe, i would not recommend honey in this recipe because it seems to take over the flavor, For my first ever chia pudding it was amazing!

I added a bit of organic maple syrup to both the raspberry and chocolate mixes. Also I am vegan and did not have any vegan chocolate chips handy so I substituted those for cocao powder and a splash of vanilla. I also substituted coconut milk with almond milk as it was the only thing I had. Turned out great! The chocolate layer was nice a rich and the tartness of the raspberries complimented it nicely. It was also very easy and I am a college student so anything that is quick and easy is right up my alley. Thanks for the post!

Hey! Nice to meet you! My name is Maria, and this is my food blog. Here I share my favorite healthy recipes, all prepared and photographed (with love) in my small kitchen. Thank you for stopping by!